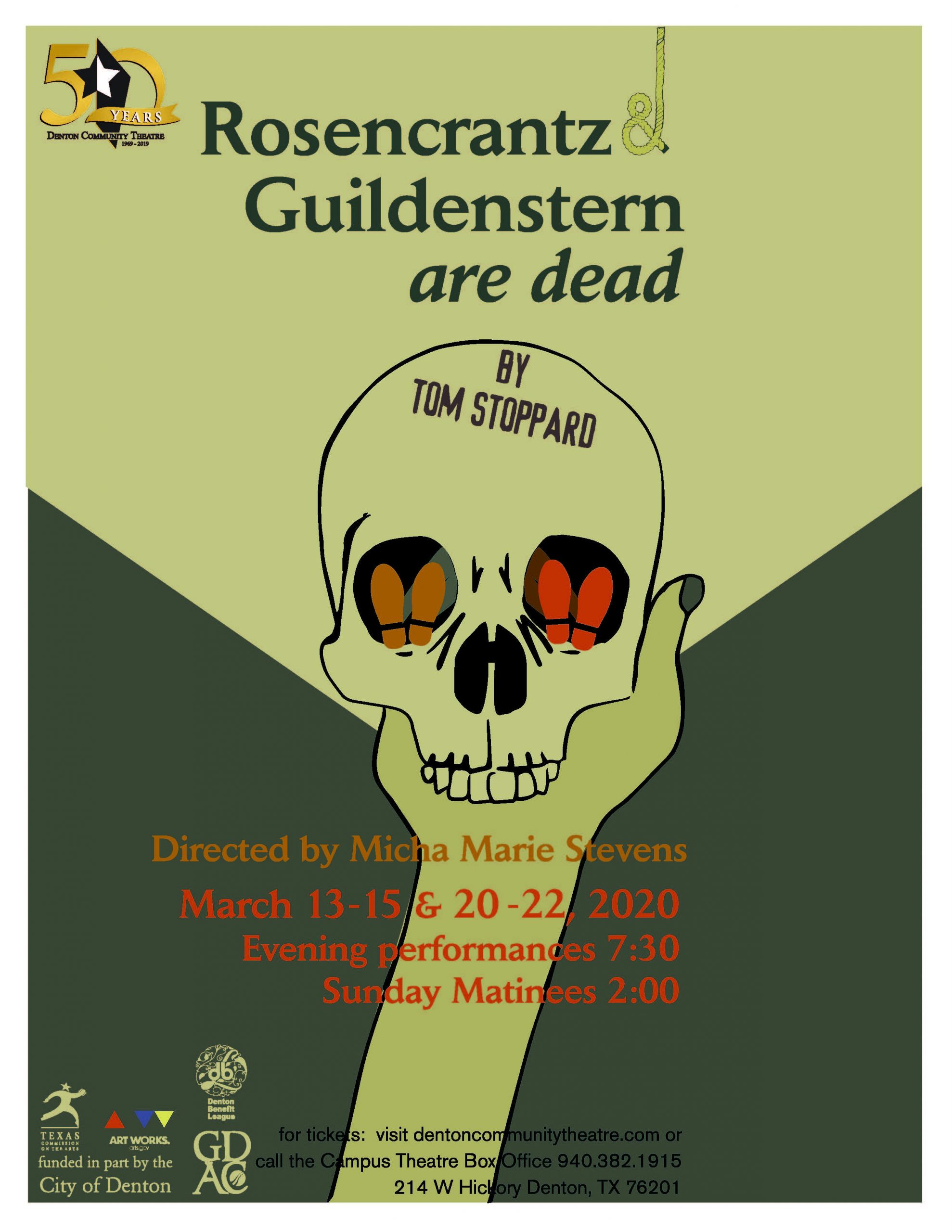 Denton Community Theatre is excited to announce auditions for Rosencrantz & Guildenstern are dead by Tom Soppard..  Directed by Micha Marie Stevens, auditions will be held January 20, 21 at 7:00pm at the Campus Theatre located at 214 W. Hickory, Denton.

Two rather hapless minor characters from Shakespeare’s play, Hamlet, tell their story. The complexities of life keep them perpetually confused.  A humorous, yet thoughtful look at  human existence.

Auditions are open – no appointments – and will consist of cold readings from the script.  Headshots and resumes are appreciated and welcomed, but not required. Must be available for all rehearsals and performances.

Rehearsals will be January 25 – March 12, 7pm to 10pm at St. Barnabas Episcopal Church in Denton.

Roles Available (some roles have been pre-cast, but most available):

Hamlet–  (Male/mid to late 30’s).  The Prince of Denmark.  Hamlet is melancholy, bitter, and cynical.  A reflective man, but at times rash and impulsive.  “Best friends” with Rosencrantz and Guildenstern.

Ophelia- (Female, late 20’s-early 30’s).  Daughter of Polonius and is the love interest of Hamlet.  Her love of Hamlet and her loyalty to her father creates a tragic ending.

Alfred/Player Queen –(Male, 20-30).  Struggling to find his place.  Often berated by The Player and seeking vengeance.  During the Hamlet “play” he is Gertrude.

Tragedian Poisoner-(M or F, 30-60).  Mysterious and evil actor type.  Most definitely a “method actor” type who has been on the stage a long time.  During the Hamlet “play” he/ is the poisoner and the King of England.

Tragedian “Spy” D/Court-(M or F, 30-45).    Questions everything and is a bit fearful and suspicious of people.  Eerily similar to Guildenstern.

Tragedian “King”/Court (Male, 40-60).    He is a liar and a thief in many ways whilst greeting you with a charming smile.  During the Hamlet “play” he is Claudius.