Witness for the Prosecution

Witness for the Prosecution – by Agatha Christie– Sept. 11, 12, 13, 17, 18, 19, 20
Leonard Vole is accused of murdering a wealthy older widow. His wife could testify to prove
his innocence, but she takes the stand as a witness for the prosecution. With a plot twist here and
a turn there, true motives are revealed and we find out if the true murderer will ever come to
justice.

Marat/Sade –  By Peter Weiss. Translation by Geoffrey Skelton. Verse adaptation by Adrian
Mitchell. Optional music by Richard Peaslee. – Sept. 25, 26, 27
The Marquis de Sade, while an inmate of the Asylum of Charenton, staged a play depicting the
assassination of Jean Paul Marat. This is an intense play within a play where the Marquis’ fellow
inmates are his cast as he portrays the bloody class struggles in France in the late 1700’s. A must
see for those who crave unusual theatrical experiences. For mature audiences.

The Rocky Horror Show – Music, lyrics and book by Richard O’Brien– Nov. 13, 14, 15, 19, 20,
21, 22
Join everyone’s favorite transvestite/ mad scientist Dr. Frank N. Furter, Riff Raff, Magenta,
Rocky, Brad, Janet and the rest of this outrageous cast of characters as they rock the house. This
successful musical combines the unintentional humor of B horror films with 1950’s style science
fiction and mixes it up with rock music in a spooky old castle. For mature audiences.

A Tuna Christmas – Dec. 11, 12, 13, 18, 19, 20
Vera Carp has won the Tuna, Texas, annual Christmas Yard Display Contest 14 years in a row.
This year, however, a mysterious vandal threatens to throw the contest into turmoil. Meanwhile,
Joe Bob Lipsey struggles to mount his production of A Christmas Carol despite numerous
vexations, while Bertha Bumiller tries to hold her family together for the holiday season. The
other colorful residents of Tuna are also on hand to provide holiday hilarity, Tuna style!

The Lion in Winter

The Lion in Winter – by James Goldman– Jan. 15,16, 17, 21, 22, 23, 24,
It is Christmas of 1183 and King Henry II, his wife Eleanor of Aquitaine, their three surviving
sons and a guest, the King of France, vie for power over the empire. Eleanor has been
imprisoned by Henry for 10 years and is allowed out for Christmas Court. The audience quickly
sees that her gamesmanship skills are finely honed and it is easy to understand why Henry keeps
her influence locked away. 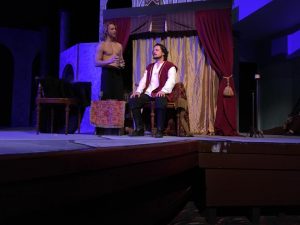 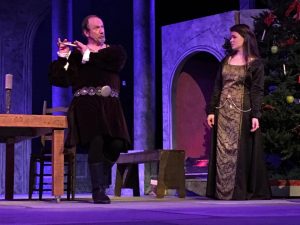 Driving Miss Daisy – By Alfred Uhry – February 5, 6, 7, 12, 13, 14
The time is 1948, the place is a small southern town in the USA. In this place and in this era an
unlikely friendship begins to develop between a cantankerous elderly white woman and a proud,
thoughtful black man who is employed as her driver. Over the years they find the common
humanity in one another. The play is sweet and heartwarming, but not saccharine and its
message is affirming rather than self-righteous.

Mary Poppins-  music and lyrics by Robert B. Sherman and Richard M. Sherman (with
additional music and lyrics by George Stiles and Anthony Drewe) and a script by Julian
Fellowes – Apr. 8, 9, 10, 14, 15, 16, 17.
This delightful musical introduces a very special nanny who is “practically perfect in every
way”. She can make tidying up a magical experience. In fact she can make any endeavor or
outing a magical experience. Audiences will be as delighted as her charges, the Banks children,
when Mary Poppins arrives at 17 Cherry Lane.

Glengarry, Glen Ross – By David Mamet – April 1, 2, 3
This biting comedy tracks part of two days in the life of small-time real estate salesmen as they
desperately try to eke out a living. The buyers are few and far between because the plots they
have are not what anyone wants to buy. They will resort to most any unethical, even illegal
means to try to snatch a piece of the American Dream. For mature audiences – strong language.

Rumors -by Neil Simon – Jun 10,11, 12, 16, 17, 18, 19
A classic farce set at a dinner party where just about everything goes awry. It is Charlie and
Myra Brocks’ 10 th anniversary and the first couple to arrive find Myra missing, no kitchen staff,
and Charlie has shot himself in the head – but he missed due to passing out from the Valium.
From there the evening gets even more chaotic. Adult language.

Encore 9 Always, Patsy Cline – Book by Ted Swindley –July 1, 2, 3, 8, 9, 10
The show is based on a true story about Cline&#39;s friendship with a fan from Houston named
Louise Seger, who befriended the star in a Texas honky-tonk in l961, and continued a
correspondence with Cline until her death. It features 27 of the singer’s hits including “Crazy”,
“Sweet Dreams”, and “I Fall to Pieces”.

West Side Story – Book by Arthur Laurents, Music by Leonard Bernstein, Lyrics by Stephen
Sondgeim, and conception/choreography by Jerome Robbins – Aug 12, 13, 14, 18, 19, 20, 21
Shakespeare’s Romeo &amp; Juliet is set in 1950’s New York City. The Sharks, a Puerto Rican
street gang are taunted by The Jets, a Caucasian gang. Tony, a former member of the Jets and
best friend of the gang leader, Riff, falls in love with Maria, the sister of Bernardo, the leader of
the Sharks. This ground breaking American musical includes the songs “America”, “I Feel
Pretty”, and “One Hand, One Heart”.

Art – by Yasmina Reza, translated by Christopher Hampton – Aug. 5, 6, 7.
Described as wildly funny, this is the story of Serge, who has purchased a painting – white with
white lines. His friend, Marc thinks it a ridiculous joke. Serge insists that Marc is not qualified
to make a judgement. Mutual friend Ivan is eager to please and claims to like the work when
asked by Serge. The fight is on. Will the friendship survive? For mature audiences.

Director Applications Now Being Accepted for 2023

Thank you for your support.

Help a Kid Discover Their Love of Theatre!
Donate to the Darby Barrow-Brady Memorial Scholarship Fund to help send a kid to Theatre School.